A bit of a rant disguised as trying to educate certain audience. That’s what it is today.

Advice for the Submissive

There are things one can do to gauge whether someone is trustworthy or not - this is in my opinion especially useful for submissives since they’re the ones who give up the control and can easily get hurt as a result. Don’t get me wrong, a dominant can get hurt as well - there are things that a submissive could do that could completely destroy them. However it is a bit less likely, partially cause they are the ones in control and partially because they are naturally a bit more resilient.

One thing that I always tell people to watch out for is whether their potential dominant initiates negotiation about wants/needs/limits, chat about kinks and interests, whether they want to have regular check-ins to ensure that both sides are happy. Every BDSM interaction should start with a discussion of what each party wants from it, what they definitely need in it, and what they don’t want to ever experience (limits.) It’s also kind of a common sense to get to know each other a bit, know what each other likes, what kinks or interests they have. BDSM dynamic generally isn’t a one night stand and even when it is, this should happen. For a more long term dynamic regular check-in becomes important to ensure that both parties are still happy, that their wants/needs/limits did not change and if they did, how, we need to talk about it to know what might hurt either one, in one way or another. Positive reinforcement is also very important here to make sure that one or the other doesn’t fall into “a drop.” That is a bad feeling, for example from the dominant side it could take shape of feeling like a monster, that you actually hurt someone you care about.

And let’s not forget about a safe word. If we’re talking about BDSM, we should have a safe word. It is common to be mute for one reason or another in VRChat - if this is the case, the dominant can come up with alternatives. I mean even in real life I can shush someone with a gag. In such an event, I would tell them to hold my whip, or bite onto it, be creative. If they drop it, I know that something is wrong. Similarly in VRChat one can use physics objects and watch out for them falling - this works when the submissive is tied up, gagged, mute… If they have free hands it’s much easier, just cross your arms into an X as a universal sign, or you can also negotiated one hand sign if one hand is indisposed. A fist in front of your mouth?

Advice for the Dominant

Don’t be fake and wield your power responsibly. Being a hard dom doesn’t mean that you shouldn’t care at all, that’s not what it means. Similarly being a hard dom doesn’t mean that you shouldn’t provide any aftercare. Always make sure that your pet is okay. Maybe you could take a look at it from real life perspective if you don’t have this experience. This is a human being that entrusts their life to your hands. Fully, without limits. You are responsible for their freedom and their well-being. You know, it is an honour to be trusted with someones life. Do you feel proud and happy when you hear the bell on your pets collar? I’m overjoyed, it makes my day.

It’s not all about sex. It’s more often about emotions than sex. How it feels to be powerless, without any freedom… How it feels to be in control over someones freedom, their life in your hands. Anyway, do take your time to ensure that both sides know what they’re getting into and that you both understand where the limits are. Safewords aren’t there to immediately drop everything and end your scene, so don’t be afraid of them. Safewords are there to pause, find out what’s going on and how we can make it better. Either way though, don’t ignore them.

There seem to be a scary amount of minors in VRChat who want to be adopted, to be pets, go for walkies on a leash and all that. It seems to be rather common that people think that Lifestyle Pet Play (yes that’s what that would be) is SFW and even okay for minors. Hate to break it to you, it isn’t safe to expose minors to it. Not having any sexual aspects doesn’t make it safe for immature audience. Let’s take that idea apart. Let’s have a minor engage in pet play for a few years as they grow up. Let’s have them get so familiar and “safe” in it that they think that BDSM pet play is no different. Without establishing safe words or limits, diving straight into it. I’ll let you figure out the potential outcomes. 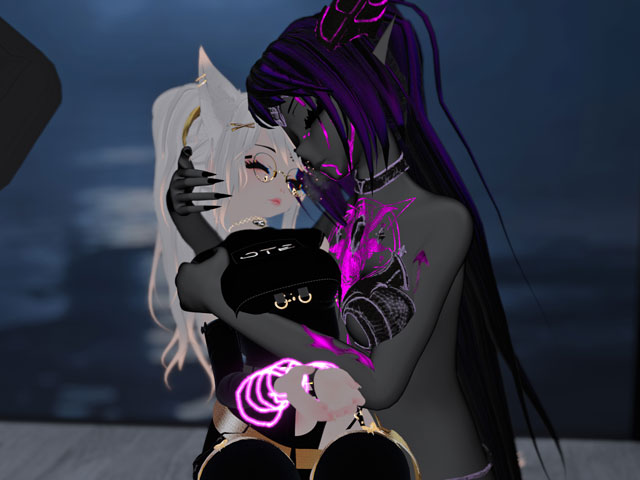 Rhea's pet in her embrace with tied up hands.