The story of hard work, blood and tears at devconf.cz 2019

The task was to organize booths at the venue.

Sounds simple, doesn’t it? In fact it’s a lot of physical work and a lot of preparation. And in my case, it ended up being several hours of tears and quite literally decent amount of pain and suffering…

Not that much of an issue there, other than some issues with communication… And I did actually learn some lessons about what information to communicate better, and answers to insist on getting from other organizers and booths.

I’d like to claim that I’m pretty active and relatively fit person (for a programmer, right?) Neither overweight, nor underweight, and all of it in the bones and muscle.

I got up way before 6am, with but 3-4 hours of sleep, to rush to the office. Someone thought that it’s a brilliant idea to schedule an interview with a candidate into my team for 8am… Well, suffice to say, most of my day was filled with meetings. 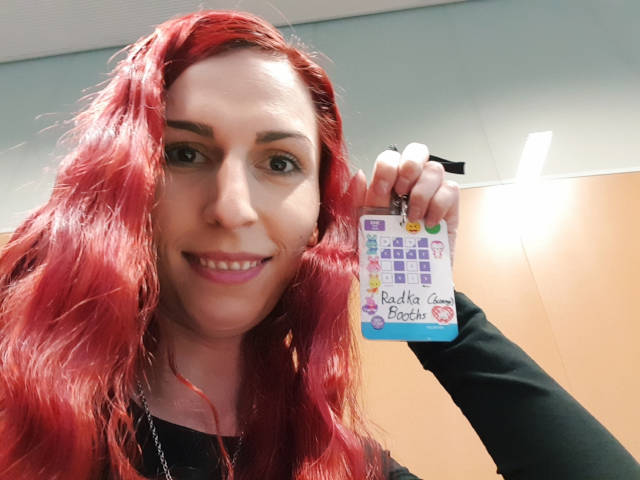 At least my badge was full of bunnehs!

Oh I did get to go for a lunch with an amazing hooman, a friend and colleague from US, visiting Europe for the first time to speak at devconf.

In the afternoon I picked up some monitors and notebook stuffs from our IT department, to take it to the conference for some of the booths. After that was loaded up into a van, we moved to the venue by a bus, where I spent several hours moving tables and preparing power extension cords for the booths, mostly with one hand because I was holding my phone with an ongoing .NET Core meeting and some documents open on it. Being responsible for a product means that I really want to be in my product meetings, especially when we have several sketchy releases ongoing. 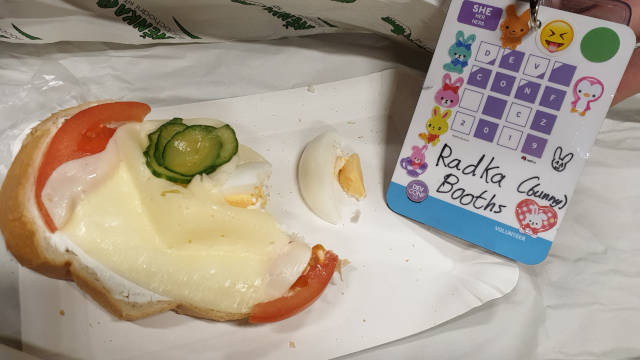 I got to the venue at give or take 7:30 after less than 3 hours of bad and many times interrupted sleep just to immediately start preparing all kinds of hardware. I had a few tweaks to do, helped all the booth staffz set-up and then taped the power extensions to the ground so they’re not tripping over it all the time.

By the time I dealt with everything and put out all the fires it was almost 11, one heck of a late breakfast. I got to sit down for half an hour, eat a bread, drink redbull, and listen to some random presentation…

Then another round followed, before I went to eat some sorry excuse of a cold indian meal that I got for my meal voucher. Next time I’m not gonna try anything new! I was semi-free between 14:00 and 16:00, when I started to move some equipment because two booths in “the other building” were freezing. There was a surprise power extension through an open window there, and these booths were right between that open window and the door that people used to get in. Suffice to say, that place kept getting flushed with freezing air all the time.

I was done somewhere around 18:00 to go for dinner with some amazing hoomans. Got home, caught up on some of my community management responsibilities and fell asleep around 23:00.

I slept great… til 6! The better I slept, the worse it was to get up though =( 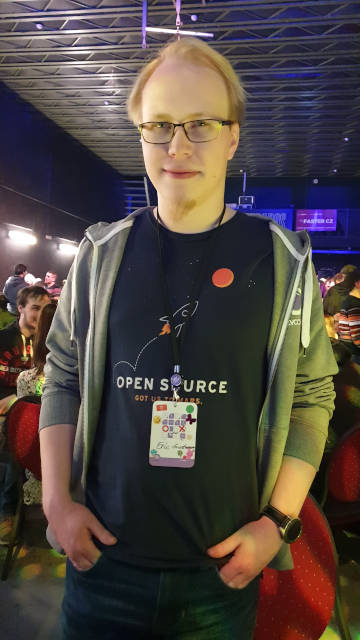 Eric at the party, check out his badge!

Pretty much the same story, at the venue around 7:45, moving things and setting booths up at the new location where they did not end up looking like sad cubes of ice… Eventually I stopped by the check-in area to ask about hoodies, if I get one already or not yet. You see, there was a decision made that they want to let the speakers get the hoodies first, to ensure that they get the size they want. The answer about my hoodie was, and I quote: “I consider you a regular volunteer.” To which I of course answered with a brief explanation of the difference between an organizer and a volunteer, “but there is a difference between standing 4h at check-in or chairing presentations; and running up and down and carrying things for 12 hours, 4 days.” After that the mean lady snapped at me with “We’ve been here on Thursday til 11pm, where have you been? Where have you been!” I provided an incomplete answer with raised voice “in a meeting with Microsoft!” …and I almost literally ran away. More accurate answer would have been what I described above. I was preparing the booths while being in those meetings on my phone.

Late breakfast again, somewhat better lunch than on Friday because I went for a cheesy pasta that I was familiar with. And lots more work… I took some pics&gifs of the awesome content in them booths and tweeted some.

Eventually, I broke down. I don’t know if it was because of how she snapped at me, implying that I wasn’t doing enough while I was all in pain already… Or that I wasn’t getting a hoodie again - 3rd year that I participate at devconf in one way or another, so far they ran out of my size every time and so I didn’t get a hoodie I could use. I really wanted this one though, I loved the colours (black and purple, go figure) and it was the right shape as well (not a cube type hoodie.) Or more like everything combined, I broke down while walking from a booth to another, randomly burst into tears mid-hallway. I ran behind the closest corner, cried for a while til I calmed down a little, started walking away to hide somewhere just to fall apart even more. And so I spent the next hour and half standing in front of a window in the middle of a staircase, looking out, crying. Eventually I gathered myself and went to find Eric. I cried some more in his arms.

Had to move some more stuff in the evening again, I was done around 18:30 just in time to go directly to the “after party,” where I simply took a layer of black tights off to magically make myself look a bit more appropriate for a party. Legs, right? Honestly, I think that I looked like a zombie anyway…

More morning set-up, although this time I slept in and got there late - 8:30-ish. I knew that the people that will need me were coming after 8:30. Moar work in the morning, a bit of lazy day otherwise. I spent at least 3 hours in some presentations that I didn’t care about, plus Jared’s presentation which was very interesting and I loved it.

Clean-up after 16:00, packed up all the tables and power cords, hardware, cleaned the ground from that pesky duct tape that was used for power extensions… etc etc. We went to dinner with mah hoomans again, same time, 18:30. Bed at 22:00? I don’t even know anymore.

My knee hurts. I can’t walk. It’s completely destroyed from running up and down the stair so damn many times, and lifting things, crawling under tables, …. I’m an extremely active mountainbiker. To have my well exercised knee give-in is something, must have been one hell of a weekend.

And I can’t speak at all, I can’t even whisper. My throat is in flames, very very painful. I have a presentation and a panel discussion at FOSDEM. I hope that I’ll be able to deliver.

Have you ever been in an airplane sick? I have. I really hope that I’ll be good enough to not suffer through that.

Although I am using myself as an example, you can be sure as hell that there were many others who contributed their own sweat, blood and tears. You know who you are, I do too, and I thank you for your hard work to make this thing happen!