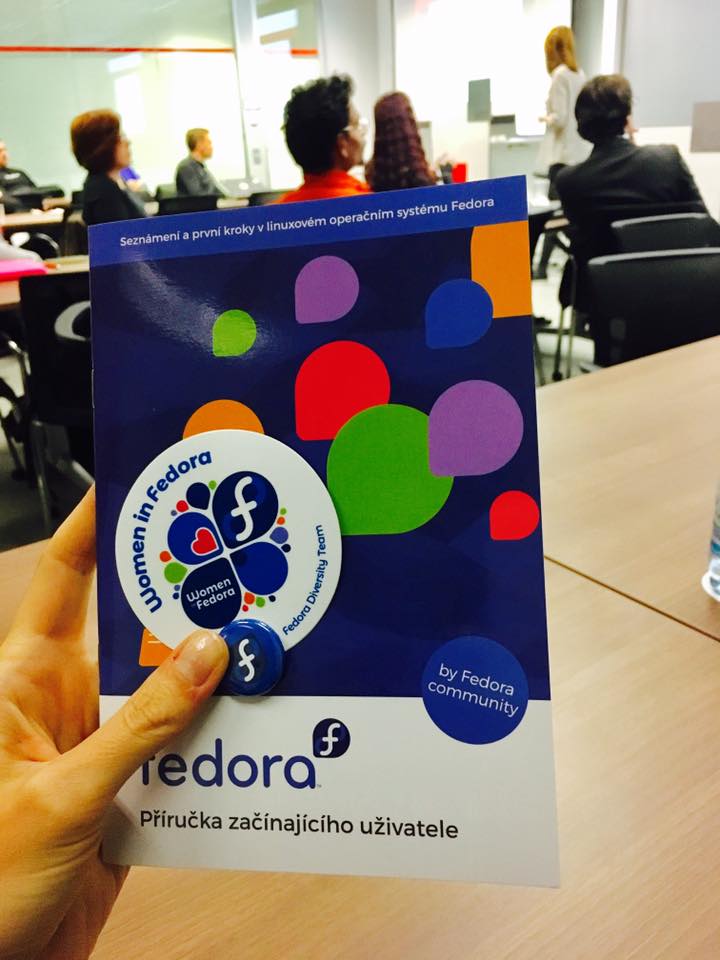 It was a rainy day. I had three slides prepared with the schedule and some basic info about speakers, to be automatically switching during my keynote and during the break. Jiri had the first talk, about Fedora project and how to contribute. Next was Iryna with quite nice FedoraLovesPython demo and mentioned how one could contribute with porting older packages to python3. I was talking about C# in Fedora just before the break, the usual - what IDE’s are available and actually worth using in Fedora, and how easily can C# interface with Linux using DBus. After my talk I rushed to unpack food (which was quite tasty!)

After the break we had Sabina talk about Diversity and Inclusion in Red Hat, embracing differences as diverse and inclusive meritocracy. Bara introduced Czechitas, a non-profit organization teaching girls about programming, data manipulation and other IT things. Tereza closed the event with her talk about internships within Red Hat and mentioned that we are also quite diverse in age, with the youngest intern only 16 years old.

We did have one technical issue during the event, somehow the HDMI projection died, but we were all able to use “the other wire” instead so it was okay, with a few minutes of a delay trying to get the HDMI working.

We had planned to go to nearby restaurant for afterparty, but even my colleagues who I thought would go didn’t, so we canceled it and had a private afterparty in the office with my friend/colleague Lukas. We tried to somehow finish the food that was left, at least a little. It was a good dinner, we had 50% of it without meat and I loved the tiny breads (chlebíčky) without ham because they had all the things I love - camembert, a little circle cut of a cucumber and of a radish and some other cheese in a shape of a heart! :D

Big thanks goes to Matej Hrusovsky who helped me with organizing the event, TPB-B Facilities who prepared the room and took care of the guest building access, and our IT Petr who explained to me the magic of the meeting room and microphones.

Another big one to the speakers, your presentations were awesome!

Last but not least, thank you all who came and thanks to the Women in Fedora <3