This is a story about my character in the Elite Dangerous game. A story of love and adventure, with a taste of science and beauty of space ships. A diary written by Commander Rhea, passionate fighter pilot.

Looking for the second chapter? 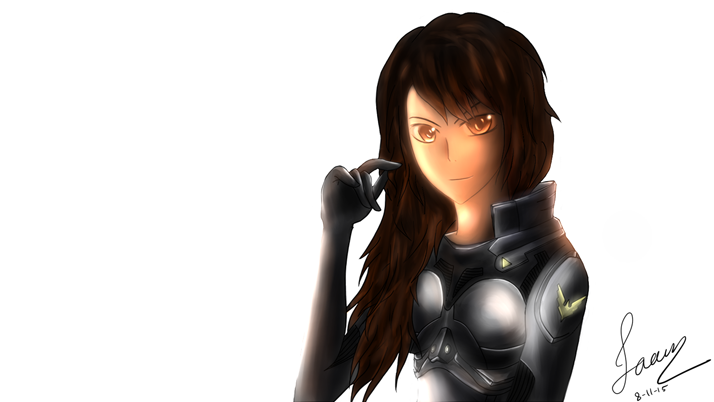 Drawing of CMDR Rhea by Laanz

I took a contract to recover lost cargo from crashed vessel. It was on some agricultural planet - night side. So I was chasing jettisoned cargo from damaged ship, in the atmosphere. They dropped it at high speed before ejecting themselves, to save it from the destruction. It got far enough from the crash site to be out of sensor range, so i didn’t really know where it was…
I was flying my Fer deLance in the general direction of their original heading, when I was met with several eagles and even an anaconda flying straight at me. I dropped it down to literally licking the ground, trying to get them to crash as they were chasing me.
When I managed to shake them off, I almost hit a ground vehicle in the field, i immediately turned the ship around and landed, perhaps they know something about the cargo… The “tiny” vehicle had just arrived as I was walking down the ramp. The air was lovely fresh, i could smell burnt crops thanks to my thrusters… Illuminated from the back by my ship lights, all they could see was just my shadow. I was wearing heavy combat flight suit, somewhat armoured navy issue that would provide decent protection against small personal weapons. Navy would use these in action in case of being boarded. Despite wearing this, it felt really good to feel real gravity, the breeze in my wavy hair… I spent way too much time in the void.

“Hey there!” someone shouted from the vehicle as I was walking towards them. I could clearly see that it was an old but in very good shape car, jeep is what it’s called i think. It was big one for that, Three guys jumped out of it, i could see two more figures sitting inside, judging from their hair likely women. “Hello” I said and smiled as we finally met. They were young people, not more than 20 years old, making me feel a bit old considering my military and combat ranks, however i’m still only 25! “What’s going on? We heard some explosions and then you appeared out of nowhere…“ One of them asked, the driver. Handsome young man i’ll have to admit. “Well, I came here on a mission to retrieve a cargo container from a ship that crashed a few hundred kilometers west, and as I was looking for it I was surprised by a wing of Eagles and even some bigger ships that frankly, should never enter atmosphere, hehe.. I dropped my flight level to just a few meters above the ground, those explosions were two of them crashing into the ground in the dark… Eagles are not famous for their lights.” I explained what happened… “Anyway you guys don’t happen to know anything about the cargo in question?” They were slightly amazed by my words, I would guess that they’ve never seen a dogfight or any kind of proper combat vessel before. They shook their heads without words. “Damn… I’ll have to resume my search in the morning… what are you guys doing out here at night anyway?” I was curious why were they out of the city at night, young people, obviously not working a nightshift. “Heh we were…“ - “Party girl, wanna join us?” The driver got interrupted by a younger one. I was indeed tempted, to have a bit of fun, to get to know new people and most importantly to eat something and get some rest… “Sure, lead the way!” I bowed the imperial way, smiled and turned around swinging my hair in the breeze, back to the ship then.

By the time I got to the bridge and seated my imperial bum, their vehicle had already turned around, lined up in front of the nose of my ship. I flipped some switches, engaged the thrusters and even the Flight Assist. I didn’t want to risk burning their tiny vehicle with too much thrust by accident. I had gently pushed the vertical throttle hat up, when they started to move forward. I’ve set the throttle to about 1 millimeter forward, ground vehicles top speed in the off-road terrain is but a few meters per second, not more than 20. These civilian vehicles are nowhere near as complex piece of technology as the Scarab in the vehicle bay of my ship. I followed them but a few kilometers, til we arrived to something like a camp-site, no solid buildings, just a few tents with a fire in the middle. I liked this a lot, freedom, no ships anywhere near, just two other vehicles parked nearby next to each other. The vehicle i was following stopped next to those, I went to set my ship down right next to them, with the exit out of my ship towards the camp. I walked down to already see a few people standing by the tents, observing carefully my Fer deLance. You could tell that they really do not see spaceships often.
The driver was running towards the ramp as I was walking down… The young man whos name was yet to be revealed was smiling, “Get comfortable, you look like you need some rest, perhaps take that armour of yours off?” he asked. I did not intend to go there in my heavy flight suit, but I did not have any casual clothes that would suit the outside temperature - I do not deal with cold weather well and it was below 20 degrees celsius… All my clothes were fit for controlled environments between 20 and 25. “I’m afraid that I do not have any appropriate clothing for this cold summer night. Kirea, close the ramp.”  Kirea is the name of my Fer deLance. Entrance to the ship closed and and my host, i guess, gestured towards the camp. “What’s your name then?” I asked as we walked. The blonde young man said “Eric, what about you?” - “Rhea, Commander Rhea Ayase. Pleased to meet you,” I smiled at him.

Everyone was already back to drinking colorful alcohol in transparent cups. “So… would you like something to eat? We’ve got some meat to be roasted on the fire..” he asked, trying to be nice. I looked at the fire, there were some people sitting around it, looking at me. I nodded, I was hungry and i wouldn’t mind real food for a change. “Hey!” some of the guys greeted me at the fire as we sat down, while the girls that were clinging to the two guys were obviously drunk, unable to react to the situation in time. The youngest one out of the few sitting by the fire started a conversation “So you’re a pilot huh? You look like one of those arrogant imperials officers… no offense, sorry.” I got a little surprised, well, it is true that imperial officers are arrogant, but i’m no imperial officer. “Hehe, none taken. I am ranked high in the Imperial navy, that is true, but I am not in active service and I work as contractor only.” Eric sitting next to me stabbed a piece of round meat with a wooden stick, and placed it into fire while I was answering, then he looked at me “Oh that’s interesting. So what’s your rank?” I smiled at him, “I’m Elite.” They were surprised, probably because of my age. “I’ve never heard of Elite Commander so young. How old are you if you don’t mind me asking?” asked the other guy, while holding a girl who was sleeping. “About as old as the Princess hehe,” I chuckled.
“Isn’t it lonely out there?” Eric kept staring at my face. “Sometimes, when I travel long distances, it does get very lonely, however I spend most of the time chasing off bandits, negotiating trades and escorting cargo ships, it’s often either full of action, or casual chatter with traders. They are nice guys, they won’t try to kill me at least.” I explained what is my life about in those few sentences, looking into fire… it was mesmerizing… “Here,” he passed me the stick, i would hold it in the fire like he did, while he turned around and grabbed some bread. “You have to turn it, otherwise it will burn on one side…“ he would gently touch my hands and guide the meat a little bit higher above the flames “and hold it just above the tip of the flame, that’s where the temperature is just perfect.” I just nodded, with big eyes on my face… “What do you eat while you’re in your ship for days?” - “Well, the usual long lasting food is packed in air tight squeezed bags. You plug it into water dispenser, it will issue exact amount of hot water, and then you leave it for a few minutes to settle, it provides proper nutrition and you can get really huge variety of meals at every station or spaceport.” He shook his head “It doesn’t sound very tasty, here it should be done” he gave me the stick while he was holding the bread “place it here on the bread, i’ll hold it, and you pull the stick out.” I have done so, and then he gave me the food. “So, how is it?” I took a bite… “mhmmm…“ and I had kinda full mouth. “I’ve never had something so good…“

We carried our discussion for a while, some other people would sit by and talk to me, I was telling them stories about some of my interesting missions and mysteries I had solved… it was getting late and cold, I felt it even in the flight suit. The thermo regulation activates only with remlok mask. Eric saw it on me and wrapped his old-style leather jacket around my shoulders. I haven’t felt this nice for a long time, they were very friendly and nice to me - especially Eric. I was just smiling and looking into the fire while listening to one of the guys talking about some metal construction sticking out of the field… how he thinks that there is ancient city underneath these fields. Eric sat closer and pulled me to lean against him. I fell asleep in his arms.